This half term our topic is

We started this topic by having a race! The children had to work together to build, trial and modify the design before taking part in the race. They had to decide on the best way to prepare and launch their model, making sure it had the best chance of crossing the line! See the results below:

The children are moving on to explore energy, both fossil fuels and renewable sources. They will be making models and completing scientific experiments to use energy in different ways and draw conclusions.

The class will also be using coding and computer programming to make things go using ICT!

Also this term we are taking part in a Theatre Project, working with Bristol Old Vic Theatre. A performance was enjoyed by Classes 4 and 5 of the ancient Greek myth 'Theseus and the Minotaur'.

Following this Class 5 will complete a series of workshops where they will use elements of plot. costume, music or set design to explore aspects of drama and story telling. This will lead to a final project. The children will be able to decide how this will develop during the workshops, the first being Thursday 20th March, so watch this space to see how things evolve!

We have had our first workshop! 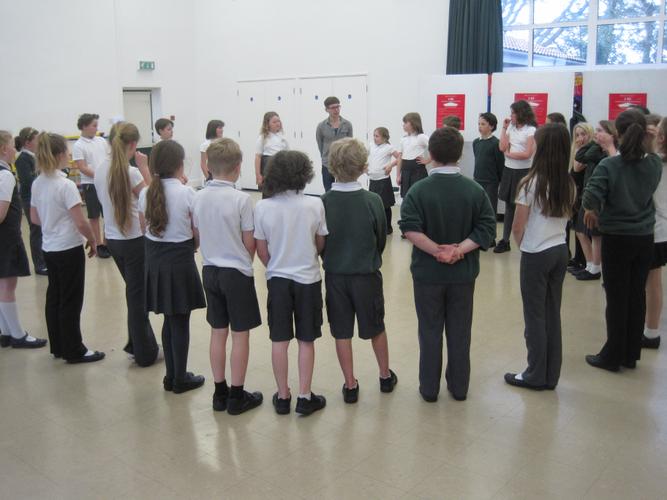 The children played some games to encourage working together and to help get to know our workshop leader, Tom.

We then used freeze frames to create pictures. This developed into making freeze frame to show five key events from the story of Theseus and the Minotaur. After the workshops we were able to share our ideas about the story and performance, making suggestions on what we would like to do during this project.

The first half of this term our topic was

We will learn about how societies make decisions. We will explore international and local forms of government, political parties and significant historical events. researching social issues, responsibilities and how actions effect others will all help us understand how people learn to work together.

Each party wrote their manifesto and chose their logo and team spokes person. The groups wrote speeches and delivered them to class 4.

The voters were divided into constituencies and each party had the chance to win seats. It was a very close race, and the Red party were declared the winners!